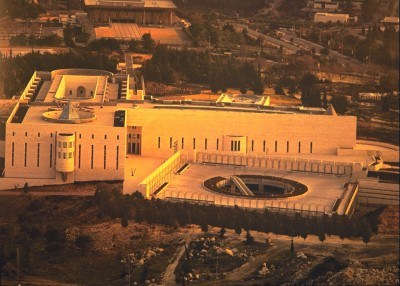 The Israel Supreme Court is the creation of one elite family: the Rothschilds. In their negotiations with Israel, they’ve agreed to donate the building under three conditions: the Rothschilds were to choose the plot of land, they would use their own architect and no one would ever know the price of its construction. The reasons for those conditions are quite evident: the Supreme Court building is a Temple of Masonic Mystery Religion and is built by the elite, for the elite.


Built in 1992, the Israel Supreme Court sits in Jerusalem, in front of the Knesset (Israeli legislature). Its peculiar architecture has earned critical praise due to the architects’ opposition of old versus new, light versus shadow and straight lines versus curves. Almost all  critics and  journalists have however omitted to mention the blatant occult symbols present all over the building. Masonic and Illuminati principles are physically embodied in numerous instances, proving without a doubt who runs the show in there.


(Article leading to the creation of this topic...)

Exposing the Star of David

The Truth behind the Star of David

THE JESUITS AND THE PROTOCOLS OF ZION