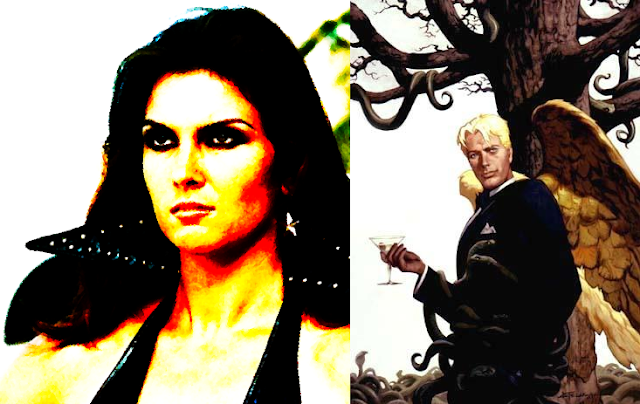 First of all I'm Dutch, so I'm communicating in another language than my own, using basic English.

If you want to determine this as childish, then I dare you to answer me in Dutch.

The problem is VERY SIMPLE: God created angels as His servants.
One of these supernatural and immortal beings was more gifted than the others, having a leading role, but still being a servant.

He had to be tested, and this test was the creation of two human beings, who (unlike the angels) had animal-like characteristics, but who were also created with the prospect to be immortal, after they would have succesfully passed THEIR test.

God's test was a test of OBEYDIENCE, because, though God had created His creatures with a free will, they still were supposed to OBEY Him, and this had to be tested.

This angel failed, because he didn't want to serve these two 'inferior creatures', and he disliked the idea that the first one (Adam) would rule the world, assisted by his wife (Eve); he wanted himself to be in control!

Of course he understood from a scientific point of view the workings of the universe and life on earth, and he understood that God had made it PERFECT!

God had given him the intelligence and the wisdom to fathom it all!

BUT...he didn't know that God wanted to test his ability to obey Him, and for this reason He had created this HUGE 'Zoo', called Earth, with Adam and Eve in charge, on His behalf.

God had created two trees and He had placed them side by side in the center of the Garden of Eden, or Paradise.

Now, realise that God knows EVERYTHING and He knows all about good and evil, but this was HIS secret.

Adam and Eve were allowed to eat the fruit of all the trees, EXCEPT the fruit of the tree of knowledge of good and evil.

THIS WAS A TEST!

The angel who had raised these rebellious THOUGHTS against his maker (and God can read EVERYONE'S minds), had been fallen from grace, and God had changed his name from 'Morning Star' into Satan=adversary, having no prospect of rehabilitation in the future, because God is NOT able to change a fallen angel's mind (except when they're cast into the lake of fire), because angels were created perfect, but with a free will, and once just ONE wrong decision or thought would have been made, such an angel would no longer be able to FREELY serve the creator without lying and dissembling, which is futile, because God is able to read everyone's mind.

Subsequently this (now) fallen angel started a rebellion among the other angels, and one third decided to follow him, but two third remained faithful to God, and this event needed a TRIAL and JUDGEMENT.

This was ALSO the reason for the creation of this world and human beings, because God wanted to PROVE His loyal angels that He is RIGHT and that Satan is (very) WRONG!

By creating Human beings, who are in fact angels in waiting, He started His WAR against Satan, with us humans being the battleground!

Every human soul is a WAR ZONE!

The first two 'battlegrounds' were Adam and Eve, and from the Bible we know they failed for their test of obedience.

BUT, God had a SECRET plan, which is part of His knowledge of good and evil, and Satan wanted to know this plan, but he was unable to grasp it, though he was able to lure Eve and then Adam into REBELLION against their maker, after which God CURSED His own creation, and what scientists now are observing is NOT the creation which it USED TO BE!!!

They are observing a FALLEN UNIVERSE and a FALLEN WORLD, and since then both people and humans, and also plants, have become mortal.

Before this happened, God had made it possible for ALL LIFE on Earth (including humans) to be able to survive, and one of His inventions to this end is PROCREATION!

God had it planned that in the future He would Himself become (temporarily) a human being, in the capacity of JESUS Christ, because from His Holiness He can't stand the SLIGHTEST Sin=transgression against His will, and (being the ALMIGHTY) He has every right to DESTROY everyone whom He doesn't like.

This is ONE side of God; the RIGHTEOUS, but STRICT Father.

But God has ANOTHER side, and that is His LOVE for every human being, seen from the point of view of a mother, and that's why JESUS didn't appear 'from nothing' or 'out of the blue', but like every other human He was born out of a WOMAN, a mother.

Now God wants to DESTROY us ALL, and He has EVERY RIGHT to do so!!

Since we're all the offspring of Adam and Eve, the CURSED first two CRIMINALS!

You and I and all human beings are CRIMINALS in the eyes of God!

We need to be PUNISHED FOREVER and juridically we have NO LEG to stand on!

BUT God provided a RESCUE PLAN, and this plan is JESUS Christ!

By dying in OUR place and by bearing OUR GUILT and SHAME, we can be FREED of ALL charges against us!

But we must REPENT and start to OBEY God, because He still has the right to CONDEMN us when He sees fit.

That's why we have to FEAR God, being very much IMPRESSED by His POWER, and if we fail to do so, He has the right to cast us into the lake of fire.

But He LOVES us, and through His ALTER EGO, JESUS Christ, He wants to HELP us to be Holy (being apart from sin), and He wants to have a loving relationship with us ALL.

Now it's up to you what you'll decide, and it's in your OWN self-interest.

Choose for JESUS Christ and you'll be saved FOREVER, provided you'll do what Jesus pleases.


Thank God for the creation of ANIMALS