NAZI America: The Truth About The so called ANTICHRIST - Hitler's grandson 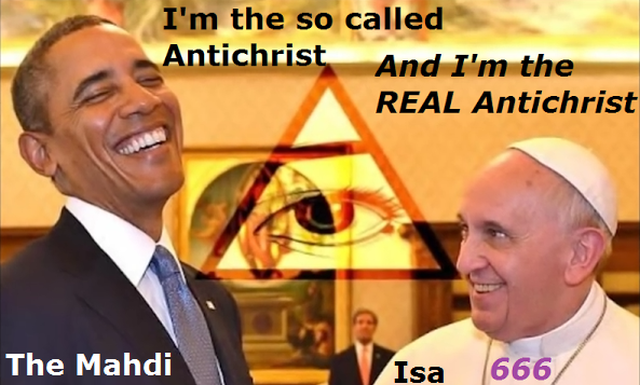 Watch this video first to know what this picture is saying:


The Truth About Obama

Published on Dec 1, 2016
Dr. Pidgeon has deep knowledge of Obama that he was willing to share with me. I hope you enjoy this interview.

Realize that this interview with Stephen Pidgeon was made shortly after the 2016 US-Presidential (s)elections.

Stephen Pideon reveals a lot about 'Obama' and about other things, and he's a believer in Yeshua=JESUS, and he calls God 'YAH' which is not wrong, but 'YAH' is the same as JESUS!
JESUS is GOD!
He thinks (or perhaps thought) Donald Trump is a 'good guy', but interviewer Jana (wife of Steven BenNun) is suspicious, due to her background as a citizen of a former communist country, and rightly so!
Note: Stephen Pidgeon is not (yet) awakened concerning the flat earth truth.


Some details of what Stephen Pidgeon reveals:


Malcolm X, aka Malcolm Little, who became a convert into the Nation of Islam, and the leader of nation of Islam, changed his name into  el-Hajj Malik el-Shabazz.
He had a teenage girlfriend, Jo Ann Newman, who gave birth to a son in 1959, called Bari Malic Chabazz, which is Obama's true identity.
The person Barack Hussein Obama jr. DOES NOT EXIST!
Bari Malic Chabazz (Obama) was escorrted out of the country in 1965, after his father, Malcolm X had been brutally assasinated.


Ann Dunham was obama's mother's half sister, who took him in.

In 1994 he had himself declared legally dead, so Bari Malik Chabbazz doesn't exist anymore.

This is what could happen after the rapture:
Obama is the Mahdi and the Pope is Isa who will be killed, but who will rise from death as SATAN INCARNATE!

Examine the following to know who's the boss of this world:

And realize this, concerning 'Obama':

How the Vatican created Islam

Then investigate with me the following:

Update: Why Was the Criminal Record of Bari Shabazz Altered Nine Years After His Alleged Death…

Something similar seemed to have happened to Bari Malik Shabazz (Obama) as to BILL HICKS ('Alex Jones') who also 'died' in 1994 and who's a CIA shill, and CIA is CATHOLICS In ACTION, disguised as Central Intelligence Agency.

Keep this in mind: ALL evil roads lead to the VATICAN and SATAN!

Obama’s real mother: Forget what you have already been told

"OBAMA" IS THE GRANDSON OF ADOLF HITLER; HIS MOTHER IS THE DAUGHTER OF  ADOLF HITLER AND EVA BRAUN

It All Begins With Baby Girl Braun-Hitler….

This seems to have been a smokescreen:  Frank Marshall Davis


Who was Malcolm X, or for That Matter, Who is Barack Obama

OBAMA is STILL in charge of the US on behalf of the POPE and SATAN!

Have a lot of 'fun' while investigating this....

The Pope is the DEVIL in the FLESH=ANTICHRIST

This video also tells you HOW TO GET SAVED!

It's ALL about JESUS Christ, God, manifested in the flesh!

Are you saved according to this?

The Gospel that SAVES!

1 Moreover brethren, I declare unto you the Gospel which I preached unto you, which ye have also received, and wherein ye continue,

2 And whereby ye ARE saved, if ye keep in memory, after what manner I preached it unto you, except ye have believed in vain.

3 For first of all, I delivered unto you that which I received, how* that Christ died for our sins, according to the Scriptures,

4 And that he was buried, and that he arose the third day, according to the Scriptures

*through the shed BLOOD of JESUS!